One man’s struggle to raise awareness about ADHD 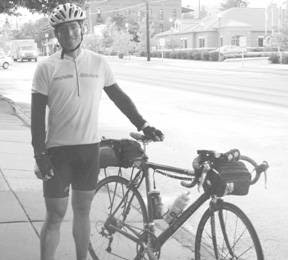 From Wellsboro Gazette- Michael Sandler, 33, of Fort Collins, Colo was exhausted wet and little feverish as he checked into the Mansfield Inn Wednesday evening, July 14.
He probably would have liked to ride his bicycle a little longer, though. On Wednesday, he traveled less than 100 miles through thunderstorms, but usually tries to cover closer to 150 miles per day.
Sandler is on a quest to ride from Portland, Ore to Washington, D.C in 40 days and 40 nights, stopping only long enough to eat, sleep, and talk to the media.
He has attention deficit hyperactivity disorder (ADHD) and is trying to raise positive awareness of the condition.
At the end of his journey, he hopes to talk to federal legislators about ADHD. His time frame is limited since the summer recess starts July 26.
“This is just to get the dialogue going,” Sandler said.
ADHD (or simply ADD) appears in three to seven percent of children and two to four percent of adults. It is characterized by inattentiveness, particularly to boring or routine tasks; hyperactivity; and impulsivty. ADHD is sub categorized into hyperactive, inattentive, and combined.
Sandler had ADHD as a child, but he did not get an official diagnosis until he went back to college for masters degrees in computers and business.

During an interview Wednesday, Sandler related that he could not understand why he could not get organized and focus on his school work.

“I found a process to help people with ADD be productive,” Sandler said.

Medications like ritalin, which he equates to insulin for diabetics or glasses for the near-sighted, serve as a basis for treatment, he said. But they do not help unless the person builds some kind of structure in his or her life. He explained that ritalin is actually a stimulant and does not help if the dosage is wrong or if a person does not have ADHD. One of the symptoms of the disorder is decreased neuromotor activity.

The most important part of living successfully with ADHD is to develop a daily routine and stick to it as much as possible. Sandler related that he has approached his 4,800 mile journey that way – by taking each stretch of 150 miles or so one day at a time.

Diet is crucial, added Sandler, who eats a high protein diet and “grazes” during the day.

He also shares his experiences in his book, “Positive ADDitudes in College.”

According to Sandler’s statistics, only five to ten percent of kids with ADHD graduate from high school. Approximately 76 percent of all males in prison have the disorder.

“These kids are brilliant people, but at some point, they just throw up their hands and give up,” Sandler said.

The problem, he said, is that people with ADHD have a tendency to give themselves negative messages – telling themselves they are just not good enough to succeed. That is reinforced by other messages from others saying they need to “pay attention” and “sit still.”

“This is my life,” Sandler said. “I don’t want anyone banging their head against the wall.”

He also mentioned that ADHD should not be an excuse for failing to reach goals.

Sandler was nearly ready to give up on himself last fall. In the span of a few months, he broke some bones trying competitive racing, he and his long-time girlfriend split up, his house flooded, and his dog was diagnosed with cancer.

He was forced to set his writing aside to deal with everything. At that point, all of the negative messages started coming back – that he could not focus on writing the book.

Then, 11 weeks ago, he fell asleep reading a book on spirituality.

“I woke up at three in the morning and said ‘I am riding across the country,'” he related.

Spirituality has helped Sandler focus and deal with ADHD. He says that some sort of foundation, whether it is family, friends, or spirituality, is important.

Sandler suggests that family and friends of people with ADHD should stand by the person with the disorder. “You are not crazy, lazy, or stupid,” he said.

He also said people with ADHD should find a job they enjoy, rather than trying to be a “square peg in a round hole.”

“Even if it doesn’t pay well, you will be more successful and happier,” Sandler said.

In order to finance the trip, he sold nearly all of his possessions on eBay, except his house, dog, car, and motorcycle. He later sold the motorcycle to some friends in Fort Collins. He is also accepting donations through his website at www.positiveADDitude.com.

Sandler’s 40 day, 40 night trip – like Noah and the ark – has seen its share of both hardship and triumph.

As of July 14, he had replaced 49 flat tires; been stranded in the middle of nowhere; had numerous near misses with cars, including four in the last 55 miles before Chicago and three between Cleveland and Erie; crashed in the second day, nearly breaking an ankle; and encountered a bear near Reno.

But bad situations seem to have a way of sorting themselves out on this trip.

Sandler related that he came down with a bad fever during the trip from Erie, probably caused by wearing rain-soaked clothing. He wanted to stick to his original plan of not stopping except for interviews. A short time after Sandler prayed for help at a gas station, a reporter showed up for an interview.

“People have been the amazing thing, not the scenery,” Sandler said.