One of the students, Muhannad, is an orphan who has been raised by his foster parents. Umm Mohsin, his foster mother, says the school administration did not sympathize with Muhannad’s background and did not think for once that expelling the child from the school could have a traumatic impact on him.

Muhannad’s trials have not ended as his parents are still trying to find a private school that would take him in. He has great difficulty with reading and writing although he has reached the fifth grade. “So far I’ve taken him to three schools. The teachers were shocked at Muhannad’s poor reading and writing skills and wondered how he could have reached the fifth grade.”
Muhannad’s foster mother took him to Prince Sultan Humanitarian City and had a doctor see him.

The doctor stressed that Muhannad should return to the same school which expelled him.

Although it’s been quite some time since the complaint was filed and although many officials promised they would take action, nothing has been done so far, according to Umm Mohsin, who called upon the authorities to set up schools for children with ADHD so that they do not feel left out by society.

Khalid Al-Fawzan, the principal of the private elementary school that expelled Muhannad, confirmed that the school did not take this action because of Muhannad’s condition. “We decided to expel Muhannad because of his conduct and hostility toward his classmates. He kept upsetting and annoying his classmates to the point that their parents filed a complaint with the school’s administration.”

Muhannad’s problem was in his way of dealing with things in the class. If he did not do his homework, he would misbehave so that the teacher would ask him to leave the class. “We told the parents in the beginning of the first semester that Muhannad wouldn’t be able to stay in the school after the semester and they had to find another school.”

Al-Fawzan noted that Muhannad was not the only student expelled from school. There were seven others with similar conduct problems.

He insisted that the decision was for the best and benefit of the students as they needed to change their school environment so that they could possibly change their behavior.

Students with ADHD can get hostile with others and get a little bit violent and break things, Al-Saqar added.

The real problem, in his opinion, lies in the fact that public schools don’t have teachers who are qualified to deal with ADHD students. The same is true for private schools. He called upon the Ministry of Education to open special schools for this category of children.

ADHD Society’s programs coordinator Hanadi Osman said private schools can refuse to take children who are violent and hostile to other students. “ADHD students need to be evaluated by doctors who will prescribe proper medication to calm them down.” 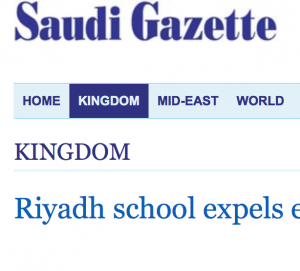