During the visit, Prince Saud lauded the Society for its voluntary activities in the Kingdom and its role in raising awareness about ADHD. In this regard, the Society uses every available means of education, and holds seminars and scientific meetings to which it invites specialists to shed more light on the disorder, he said.

Prince Saud added that the latest statistics indicate that 15 percent of the population in the Kingdom suffer from this disorder, which is more than three times the global average. He urged all sections of society to pay attention to this problem and understand how to deal with it adequately.  In this way, there will be more awareness on the subject and children with ADHD will benefit. Any delay in diagnosis makes treatment difficult, he said.

During the meeting the representatives of the Society expressed their appreciation to SABIC for its continuous support. They thanked SABIC for its prominent role in serving the community and caring for the younger generation by supporting research and helping to raise awareness about diseases, their prevention and treatment. 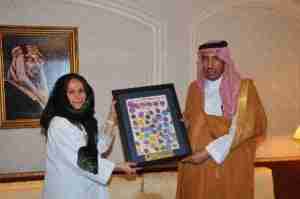