The Middle East is capable of holding Olympic Games, according to sports icons Carl Lewis and Michael Phelps, who ruled the Games in track and field and swimming respectively.

From questions about Phelps’ struggles with attention deficit disorder to Lewis’ take on the racial makeup of most of the world’s top sprinters, the pair also spoke about their own achievements at a press conference here after the panel discussion on “Reach for Gold: Competitiveness at its Best” at the Global Competitiveness Forum 2009 here Tuesday.

Lewis said he travels around the world and learns about people and their cultures. “I think this region is very resourceful and is capable of holding Olympic Games,” he said.

Phelps said it would be a great idea to host Olympic Games in this region as the whole world becomes one unit during the Games. “I usually visit the dining hall of the Games to watch people meeting one another with smiles on their faces,” he said.

Phelps said Michael Jordan inspired him. “He is special. He leads and does the best as he could. I wanted to do the same in swimming,” he said.

“I’m never satisfied,” Phelps said of his desire to be the best. “I always want to do better than I did last time.” When it comes to the Olympics, Phelps proved that in Beijing. Four years after winning six gold and two bronze medals at the 2004 Athens Games, the American swept all eight of his events at the Watercube to become the most successful Olympian of all time.

The Olympics feat was certainly not lost on Lewis, a former world record-holder in the 100 meters who collected 10 Olympic medals in his career, including nine gold. “Before this year, I used to always brag about winning nine gold medals. You taught me about changing rules,” Lewis said as he looked over at Phelps. “So now I won the most medals of the last century.”

Speaking about his childhood experience Phelps said nothing is easy. “For me, growing up as someone who has ADHD (Attention Deficit Hyperactivity Disorder), was challenging,” he said.

Despite all odds one could really reach the top if he has a dream and a plan to achieve it. Anything is possible”, he said, adding: “I was a child who never sat still. Sitting in the class was a problem,” he recalled. “I said to myself, ‘I’m going to find something that I can really focus on and show them that if you put your mind to something you really can do it,”’ Phelps told the audience. “Swimming … allowed me to focus.”

Phelps said he would launch an aquatic center with his coach. The center, he said, would also like to see Saudi involvement in the project, which is purely for healthy and active lifestyle.

Lewis believed that the youth should be encouraged to try the field of their interest. “I was not a good track athlete in the beginning. We have to focus on getting their life changed at young age and influence them for their goal. The basic thing is that the kid should enjoy what he/she is doing.”

He said: “In every child one can find talent. Challenges and opportunities are everywhere and we need to encourage the parents that their children could perform well in whatever they want to do.”

“Parents usually do not realize the potential of their children since there are so many things to do and not only sports. Allow the children to do everything. Never discourage them because it really affects them,” he said.

Carl said his parents were his number one role models. 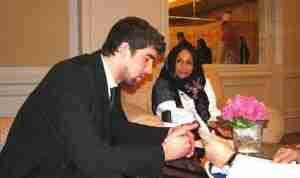