On April 15, the Attention Deficit Hyperactivity Disorder Society members hosted an event in Jeddah to celebrate their launch in the city, and to educate attendees on the moral and medical support now available to the public…
ADHD is a chronic disorder of the brain that weakens a person’s ability to pay attention and affects about 15% of children throughout the Kingdom. Dr. Suad Adel Al-Yamani, founder and pediatric neurologist, explained that while early intervention is critical, “there are a limited number of professionals in the Kingdom with the ability to diagnose and treat the disorder.”

The ADHD Society and Support Group was founded in 2009 in Riyadh as the first association in the entire Middle East dedicated to this cause. The ADHD Society aims to raise the quality of life for people with ADHD by improving services available for them and raising awareness. Since 2009, they have initiated several projects to raise awareness including workshops, trainings and lectures.

The event on the 15th was attended by over 100 influential ladies and included a display of homemade food items to raise money for charity. A competition between 12 talented chefs also took place as they contested for the title of “Best Dish.”

Dr. Al-Yamani also encouraged the participation of physicians, educators, caretakers and students to volunteer with the ADHD Society by becoming advocates and spreading awareness. 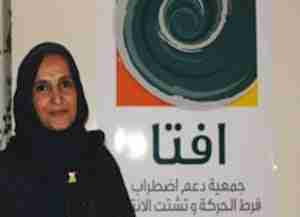